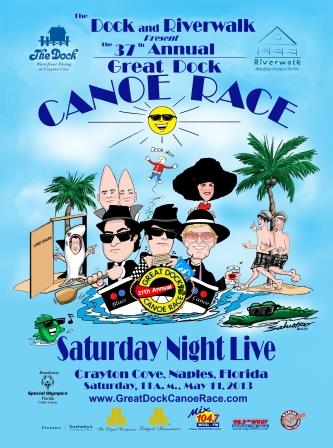 The 37th Annual Great Dock Canoe Race is scheduled for Saturday, May 11th in downtown Naples on beautiful Naples Bay. The first race began In 1977 when The Dock at Crayton Cove decided to throw an end-of-season party to celebrate its first year. Because of its waterfront setting, a canoe race seemed a natural. Twenty-five contestants and about 150 spectators participated in that first race. No one realized they had witnessed the birth of a tradition. 37th years later the Annual Great Dock Canoe Race is arguably Naples' most popular event. Contestants and spectators travel from throughout the country to race and watch, and thousands of people, from young children to grandparents, celebrate the Race on land, dock and bay. The Theme for the event changes each year, the theme this year is "Saturday Night Live," and the costumes of the participants and spectators are as much a part of the day as the paddling. Some canoeists are just out there for the fun of it, and upside down canoes at the starting line are not uncommon. Still, there are serious contestants who begin training early for the race, which covers just over 3 miles on Naples Bay. Starting the festivities at 11am, this Parade is a wonderful way for contestants for the “Best Dressed Canoe” to display their creations to spectators and judges alike. They now have 3 categories for the canoe race “Ambitious Amateurs", “Practically Professionals” and "Truly Tenacious." The Annual Great Dock Canoe Race, now jointly sponsored by the Dock and Riverwalk Restaurants, began as a community event, and has stayed true to its roots. Each year proceeds of the event are contributed to a local organization.

If you have any questions on the Naples real estate market please contact Naples native Tamara Wright with Gulf Coast International Properties at 239-438-7898 or Tam@GCIPNaples.com.